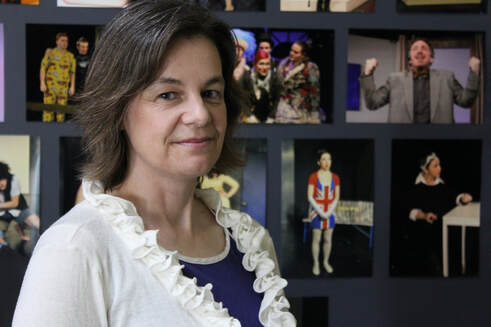 She was born in 1973 and grew up in Sydney, attending Mosman Primary School and North Sydney Girls' High School, later achieving a degree in Mass Communications from Macquarie University. After graduating with a major in Print Media, she began working as a freelance journalist writing for a range of publications including Filmink, Kitchens & Bathrooms Quarterly, Good Planet, Christian Woman, Alive, The Northern Herald, and many others. She later moved into technical writing, public affairs and human rights advocacy, working in several non-profit organisations in Sydney and Canberra.

Turning her hand to writing for performance, her first play, A Tree In The Forest, was performed at the Black Stump Festival in Appin in 2004. She completed a Master of Arts Practice in Scriptwriting at Charles Sturt University in 2009. That same year she was nominated for the prestigious Rodney Seaborn Playwrights Award for My Own Private Bonhoeffer, which was later renamed Lies, Love and Hitler for its premiere season at The Street Theatre in Canberra in 2010, as part of the 'Made In Canberra' series.

Among her short plays are works such as Five Minutes' More (commission for International Women's Day event, 2012), A Teen's Guide to Pride and Prejudice (2013, for the Jane Austen Festival, Canberra), Dogs Versus Cats (2013), and Lover's Vows (2014, also for the Jane Austen Festival).
​
Although better known for writing than acting, Elizabeth appeared as 'Gretz' in the ABC mini-series, The Boffin, The Builder and the Bombardier which first aired in 2013 on the ABC.

She co-founded a drama school with her actor-director husband, James Scott, called Canberra Academy of Dramatic Art (CADA) in 2009. For its 10th birthday in 2019, CADA was rebranded as Perform Australia, since its reach extended beyond Canberra into NSW and QLD.  She co-wrote with James a number of accredited courses delivered by the school. These nationally recognised qualifications are approved under the Australian vocational education system, and include the 81118ACT Certificate III in Performance (Acting), the 10197NAT Certificate IV in Acting for Stage and Screen, and the 10010NAT & 10295NAT Advanced Diploma of Performance. Subjects Elizabeth regularly teaches to vocational education students include Scriptwriting, Musical Theatre History, and Professional Practices.

Perform Australia and CADA have been widely awarded. In 2011 and 2012 it won the Canberra Business Point Award for the Creative and Design Category. In 2019 it won the Most Outstanding Performing Arts Organisation award with the Local Business Awards for the Canberra Region. And in 2013 Elizabeth herself was a finalist in the Telstra Business Womens Awards in the ACT.

Elizabeth has produced well over 100 theatre productions over the past fifteen years. She has also produced some of her own works, professional theatrical productions through Honest Puck theatre company, and many student productions. Honest Puck was created in 2015 to facilitate work for graduates of Perform Australia and to stage works of interest to her and her husband James. She acts as Honest Puck's producer.

Elizabeth is also a trained counsellor, holding a Diploma of Counselling and a Graduate Diploma of Relationships Counselling. She has a private practice called Hot Cocoa Counselling.
​
Elizabeth has been interviewed numerous times on local radio on ABC666 and 2CC, sharing her expertise across her many areas of interest. She is a sought-after speaker for corporate events and training, non-profit organisations and faith gatherings.

Today Elizabeth is based in Canberra, Australia.